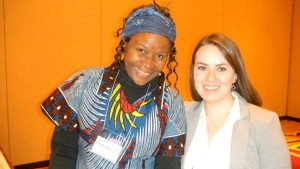 What a year I’ve had – recently I was in USA for a month, promoting my books. I visited ten schools, 2 libraries, was a keynote speaker at 2 conferences and gave two talks at Boston University, met over 60 librarians, invited to dinner at the Library of Congress and interviewed by the media.

My mini tour kicked off in St Louis, Missouri, where I had been invited to speak at USBBY conference  (United States Board on Books for Young People). It was a great honour if you ask me!

USBBY conference is the place to be, because all the big wigs of children’s book, librarians, educators and buyers would be there. Indeed it is where you can do some serious networking! And since my main aim was to promote my books, especially The Girl Who Married a Ghost, Look at This Series: Clothes, Homes, Food and Play and of course my online stories, so I’d definitely be at the centre of the action. The only bit of a cloud hanging over my head was my health; I was recovering from a chest infection.

Anyway, I packed my bags and flew from London to St Louis, USA. It was mid-October 2013, and the weather was actually very mild. By the time we landed I was sweating like a drug dealer about to be busted. The migration officer took one look at me and said coldly, “Are you expecting cold weather?”

Patty, the director of Youth Services came and picked me up from the airport in St Louis – I’d be staying with her for two days ahead of the USBBY Conference. We drove to her beautiful house, surrounded by summer plants and flowers. She decorated the walls artwork and photographs and had very beautiful crockeries – all displayed with care in glass cabinets in her kitchen.

Before I left London I’d expressed my interest in visiting schools or libraries in St Louis, so my editor had put me in touch with Patty, and now of course I had just one and half hours to settle in before my first engagement at The Carpenter Branch library.

There, I read to 60 children and their parents. What a great honour – they’d all turned up to hear my talk! However, I must have overdone things a little bit, because I began to feel very tired after about fifty minutes into my presentation – I was still recovering from the chest infection. Luckily, the energy and the enthusiasm of the children saw me through. I made a mental note to take it easy if my tour was to be success.

Next morning Patty knocked at my door, she said she was a bit concerned and wanted to know if I was OK – apparently I was coughing a lot the night before. I wasn’t even aware of it; I’d been too exhausted to hear anything.

Anyway, after reassuring her that I was fine, we drove to two schools about 20 minutes away. I read to so many children I lost count but I wouldn’t have missed it for anything in the world; the children were a joy to visit. As usual they were full of questions about my books and about Africa. However, that night I was very ill, my temperature rose sky high, and poor Patty – she ran around, bringing me soup and things to make me feel better.

As USBBY Conference drew closer I began to worry I might be able to take part in the panel discussion or even do my presentation – the main reason I had come to US, although I’d turned my chance of travelling there into a mini book tour.

Finally, Patty drove me to a hotel booked by USBBY for the conference. The whole place was buzzing like a marketplace; people from all over America, a few from Australia, and elsewhere, all gathered at this hotel! We were all loaded down with our luggage, and books.

Later that evening at a three-course dinner we were treated to poetry readings and speeches.

The next day the warm welcome I received carried me through, and I was able to take part in the panel discussion with fellow authors. It went very well and it was an opportunity to meet other authors and learn about how they began their journey as writers. The audience was attentive and asked me lots of questions about growing up in Nigeria. With the discussion over we were directed to a long table for book signing. I was amazed at how many people were waiting patiently for me to sign my books they’d just bought – in London I’d be lucky if I sold six copies!

The following day was another chance for me to do a presentation, people – mostly women – filed into a large room and I began to talk about my books, how I write, why I write and finishing with a slide show of my photographs. I’d shared the floor with an author who spoke mainly on the rise of South African writers. It was very interesting to hear about the post-apartheid writers.

With the presentations over I was free to attend other events. In one of the presentations a speaker got into hot water; the poor woman had chosen to talk about hair – a very tricky subject if you ask me, especially to a mainly black audience. Everyone knows about black and their hair – to straighten or not straighten that’s the question. Anyway, she soon offended almost everyone in the room, because of the off-handed way she spoke about hair. The lady, whom I suspect was from the Far East, knew nothing about black people and their hair, and had concluded that some people didn’t think hair was all that a big deal! A big deal, eh? Some people in the room sighed helplessly; others lifted their jaws from the floor, in shock. As for me, over the years I spent loads of money and time on my hair and I know many who have done the same, so Hair is something I take seriously and it is big business – ask those shopkeepers in Finsbury Park, London!

At last it was time to leave sunny St Louis – the weather was still mild and Patty’s gardens was still blooming with summer flowers – and to take a couple of days rest at my friend’s house in Washington DC, so I flew straight there.

The houses at my friend’s neighbourhood were locked in a fierce battle to see which of them had the best Halloween decorations on display, so instead of resting as I ‘d originally planned I went round the streets with my camera – no rest for the wicked, eh?

Soon, I was off to Boston for the next leg of my mini tour. As our plane was about to land I looked out of my window and my heart flew right into my mouth– the sea seemed to be lapping at the belly of the plane! Are we are about to crash into the sea? I pulled away from the window and cast a glance at the other passengers, and they were as calm as mint tea drinkers. What’s wrong with them? I wandered and looked back out of the window again. Again the sea was rising to meet the wheels of the plane, which were now released. I’ve heard about drunken pilots flying planes and was I sitting in a plane flown by a drunk? I wondered, thankfully I didn’t let out a mad scream – later I was told the runway is right next to the sea!

Anyway, I was met at the airport by Barbara, the head of African Studies at Boston University – I’d be staying with her and her husband at their beautiful house in Brookline, throughout my stay in Boston, which was exactly ten days. It was very, very kind of them to put me up and I was well looked after and made very welcome indeed. 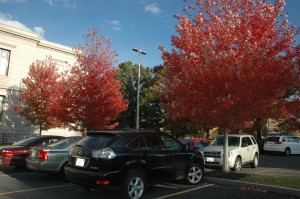 Boston is full of trees, no wonder they have such delightful wooden houses, and some parts of it reminded me of Cambridge in England; perhaps because the pace of life seemed slow and relaxed and perhaps because of the bicycles on view. 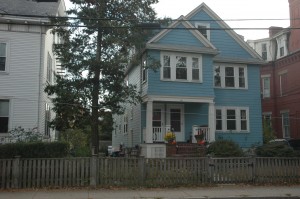 Anyway, Barbara and I went straight from the airport to a luncheon with His Excellency Raila Odinga, former Prime Minister of Kenya. He spoke eloquently about democracy in Africa and said he was very optimistic about ‘the wind of change’ blowing across the continent. He even predicted that African presidents would eventually bend to the will of their people. Could he be right? Only time will tell. Nevertheless, his optimist speech went down well with the guests – some of whom were university students and he was warmly applauded. 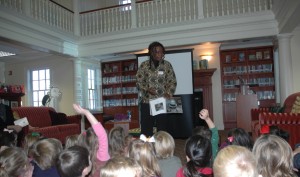 Soon, I began visiting schools. I was visiting two schools a day at one point, reading my books, answering questions and teaching the children how to play some of the traditional games I played as a child in Nigeria. It was very exciting but also exhausting.

I was invited to speak at the African Studies Center, Boston University. I wasn’t sure how many people would turn up. In the end the venue was packed; local teachers, African literature Book Groups, Boston University students, all came to hear me give a 30-minute- presentation about my work as a photographer and children’s book author. It was followed by book signing. What a great honour for me to see people turn up in great numbers.

I was also interviewed for a video on my thoughts on how I started writing.

The next visit was to Professor Zoli’s class – titled Africa Today, also at Boston University. The students had all read my books and had their own take on them, which was very interesting.

Then it was off to What’s Happening in Children’s book conference the following day. It was very well attended although it was a half-day’s conference. I, like three other authors had half an hour each for our presentations. I was the second speaker and afterwards was able to observe the way American authors do their own presenting. They showed pictures of themselves as children and even their early scribbles at nursery schools – in England I think the audience would have felt a little bit uncomfortable. And when I mentioned this to Barbara, she laughed and said the authors were making connections with the audience.

Next, I was off to Washington DC, where I visited a black school, the children were all very excited to see me, the visit was organised by An Open Book Foundation for all CABA Winners (Children Africana Book Award). I have won this award twice. 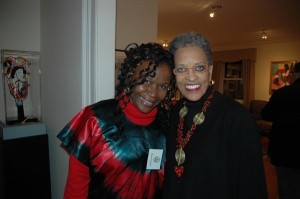 In the evening we were invited for dinner by the Library of Congress. I was worried  I hadn’t brought any fancy shoes and handbags with me from London, but it was ok in the end.

The following evening there was another dinner for CABA winners, and I was running out of things to wear!

Two of the CABA winners, including me were interviewed by the Voice of America, and we went through airport-style security; we were searched and our documents scrutinised. 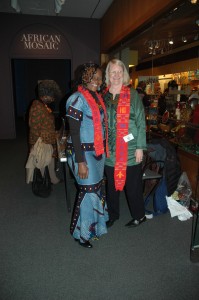 Two days before I flew back to London, I and another winner, Karen Leggett Abouraya, who wrote a beautiful book titled Hands Around the Library, were interviewed on National Public Radio.

I was very nervous before the radio programme was aired, because I get into a state when I hear the sound of my own voice – not believing how I sound. But the truth is I sound so differently to what I think I sound.

Thankfully, I’ve grown out of that silly fixation now. 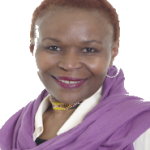 Thank you for visiting my blog…Ifeoma

You can visit my UK web site here

You can visit my USA web pages here