Reclaimed from the sea…

A journey to Lagos, Nigeria

I travelled to Nigeria last summer, long before the recent fuel-price protests and the bomb attacks in the northern states, and was very surprised by the rapid economic growth in the cities like Lagos.

Considering the financial crisis in Europe, Nigeria hadn’t done too badly, at all!

I was there to do some research on my new children’s books.

Within a few minutes of leaving the airport I spotted many new buildings. Some were five star hotels and other shopping malls. Sadly, the shopping stalls were frequently plunged into darkness due to power failures. How do shop owners ever earn a living? I wondered.

Still, Lagos looked a lot cleaner and calmer than in years gone by, and everyone I spoke to, had a good word to say about the governor of Lagos.

My friend who came to pick me up from the airport told me there weren’t enough hotels for the number of visitors in the country. I couldn’t believe it, back in Europe everyone is tightening their belts; it seemed as if the tables had turned in Africa’s favour – about time too!

My friend and her family live in a newly built gated community complete with private security guards. The guards frequently slapped their foreheads in salute as soon as they saw her car approaching.

According to Forbes Magazine, this area of Lagos (where my friend lives) is known as The Lekki Corridor, is the fastest growing area in the world. It is a stretch of land that had been reclaimed from the sea.

At 5.30 am the next day I set off for the motor park to book a ticket for the coach ride to Onitsha, 650 kilometres away!

I was travelling to Onitsha, a commercial town to see my brothers and their families – I hadn’t seen them in four years – and to take photographs for my new books.

After securing a ticket, I was elbowed in the head; the pain was unbelievable. I had bent down to pick up my bags and things when a customer behind me surged forward. He was in a rush to get a ticket.

Later all passengers were told to sit down and wait. The waiting hall, if you can call it that, was very busy. There were people everywhere; women, men and children all crowded in one place! What’s more, you could barely hear the announcer; the microphone was broken, crackling in places.

Finally, the number of my coach was called. I was very excited; I’d been waiting for a long time. But where is coach? There were at least six loading at the same time and there was no information to assist me.

I found it and was about to get on when two people wearing jackets that said ‘security,’ scanned my body and camera bag airport style. Little did I realise the terror threat in Nigeria had increased.

Getting close to the coach!

Finally I got on and sat two rows behind the driver’s seat.

Soon, my ears were assaulted by a ‘preacher.’ You could tell he was by the way he was dressed. He was in a clean shirt, starched and ironed within inches of its life! There were two more clues to his identity; he was openly carrying a bible and he was standing like a Channel 4 newsreader!

As if to confirm his status, he began spewing out passages from the bible, then he zoomed in, “Abraham came from an idol worshipping city; God brought him out of there,” he croaked.

His captive audience, including me had no choice but to listen, where would we get another coach at such a short notice? And where is the driver anyway? I muttered, fidgeting in my seat.

Public transport has no set time for departures, they leave when they are full.

Meanwhile, the preacher carried on talking, his voice rising, “Abraham grabbed his son and took him to the altar to sacrifice. . . Praise the Lord!”

A rare smile spread like water over the man’s thin face. He was beaming with pride or was it out of contempt for the poor soul?

“But God stopped him,” he said at last.

A bus journey to remember…

Will I forget this vehicle?

I was slowly losing my sanity; I wanted to run up and down the aisle, screaming! Thankfully, I had a window, which offered a temporary escape from the madness inside the coach.

Worst still, a plastic bowl was being passed round to passengers asking for a small donation for the preacher.

Why? What has he done for me? I said to myself, looking away again.

Finally, the driver made an announcement and our preacher quickly relayed it to us, “Listen ladies and gents, at Asba you will be trans-loaded on to another bus, but don’t worry the bus will be one of our vehicles and you’ll arrive at Onitsha safely.”

Our coach was brand new and there didn’t seem to be anything wrong with it.

Many smelt a rat at once.

“Why?” asked a young no-nonsense woman, who momentarily had suspended the task of chewing gum.

A voice from the back shouted, “We paid to go to Onitsha. Why are you trans-loading us?”

The protests died down eventually. Passengers have little rights in Nigeria.

The preacher smiled sheepishly and in a cheerful voice said, “You will be served delicious rice and ice water. And you will have air conditioner. But please don’t start complaining it’s too cold,” he warned.

Anyway at 7.20am our coach slowly rolled out of the motor park. We’d spent at least two hours there.

A minute later the preacher departed with a pocket full of money. Don’t worry he shared some of that with the driver!

With his departure came the sound of music, our driver encased in plastic panels played James Blunt’s You’re Beautiful, Marvin Gaye and many others. Occasionally he switched to a comedy sketch, which left all passengers in stitches.

A young woman sitting next to me suddenly began to cry. I later learnt she’d just heard the news of her mother’s death. I comforted her as best as I could; my mother died four years previously.

We stopped at intervals to stretch our weary legs, which was great because it was freezing inside the coach. It was extraordinary, my camera lens was frozen. I’d foolishly placed my camera bag on the top overhead compartment where the air conditioner valve must have been situated. I couldn’t take photographs for a while.

Now and again I’d phone my elder brother to inform him of our progress from a mobile phone I had bought at the airport.

Soon the sky opened up; it was the raining season after all. Unfortunately it made the roads pretty treacherous, and the journey took twice as long.

Finally, we arrived at Asba at 6.30, and very quickly we were bundled into an old wreck they called a bus. Worst still the vehicle was full of mosquitoes! 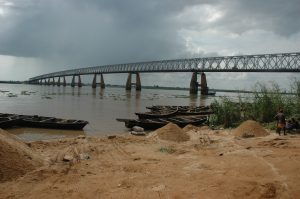 Now, I was really worried; of getting malaria, of the darkness, of the heavy rain, of not finding a safe taxi once we get to Onitsha, of being robbed and finally of my phone battery dying on me! Oh it was horrendous.

Miraculously I was able to make one more call to my brother before it died. At 7.30 our old battered bus finally arrived at Onitsha Motor Park. It was raining very heavily now and it was late and dangerous.

Most of the passengers disappeared with their luggage, I and one other person sat inside the ticket office. I vowed to stay put until the taxi driver sent by my brother came for me. I’d be easy picking for robbers if I didn’t!

Finally, the driver came and we climbed into his car. Like all Onitsha taxi drivers he was impatient, he didn’t want to be caught in the small traffic jam we could see in the distance and turned a sharp left. Within a matter of seconds we ended up in a ditch. Actually we were half in the ditch and half stuck in the mud. The situation was hopeless. Are we going to stay here until morning? I wondered.

Suddenly, about six young men with taut muscles and ripped t-shirts surrounded our car. The driver flinched and mopped his brows.

“Do you want a push Madam?” asked one of the men, kindly.

I was about to say something when the driver hissed, “Don’t speak; please don’t, they will know you’re from England and rob you.”

I looked at the young men through the window, all innocent and harmless.

A few minutes later, the men lifted the car out of the ditch with their bare hands! It was wonderful.

Then, the silly driver decided he was going to give them very little money. I was mad. I yelled at the driver, but he didn’t care.

The men’s reaction was swift, they threatened to put the car back into the ditch and soon a big argument ensued.

“We’re at their mercy, can’t you see that?” I hissed to the driver, afraid they might hear me and rob us. “Here, give them all of this,” I added, handing him some money from my pocket.

But he was a very stubborn man. He pocketed my money and gave them a few crumpled notes from his top pocket.

I quickly wound down my window and thrust some money into an outstretched hand. Finally all was well 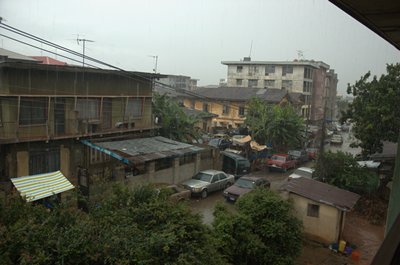 At 3.am I was woken up by a rogue cockerel, then, a woman started singing religious songs. About 5.30am the engine that ground corn came alive! It was indeed a very busy morning.

But all of a sudden everywhere fell silent; so quiet you could hear a pin drop. Soon, children everywhere began crying, “NEPA, NEPA!” NEPA is The Nigerian Electricity Power Authority.

Generator plants from every street corner responded, breaking the silence but powering the electrical machines. Sadly there is power cut every day. And at night time most homes use kerosene lamps.

It rained often while I was there.

I noticed there was a taxi shortage, so getting about meant a hellish ride on a motorbike.

After a week and half of taking photos and notes, it was time to head back to Lagos.

This time I took a mini bus, because it went straight to Lekki (Lagos) where my friend lives. 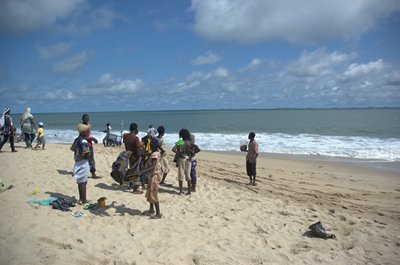 No sardines in sight…

We were packed in like sardines – it must be clearly against the rule. Several hours into our journey our bus almost rolled over on its side; a drunk had wandered on the motorway. It was a terrifying experience. But we made it safely to Lagos.

Every passenger was subjected to an aggressive search at the airport. My luggage was overturned, and everything taken out. It was horrendous. Why are passengers treated like this? Unbelievable, absolutely shocking!

Ifeoma Onyefulu – a journey to Lagos.