Sing Me A Song, Ma – a story of poetry

If anyone had told me I would be writing poems in 2020, I would have laughed at them. But in January last year something strange happened, I began to get requests from schools to do poetry workshops, and no sooner had I said no to one school another one would pop up like a jack-in-box toy. I had never written a poem in my life, and that was the strangest thing. Then, two days before I was due to travel to Scotland to do a writing workshop for a school, I was asked again. 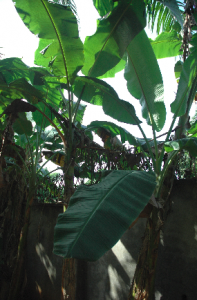 Banana trees – I write about them in my poetry…

I will gladly have done a workshop on writing plays, if such a thing exists in schools, because of No Water in The Jungle, one of my plays, staged in London in 2019.

Anyway, I had a decision to make pretty fast, and it was not going to be easy to say no to the school, with two days to go. What’s more, we, the school, and I had spent months corresponding, and setting up the timetable, and I was to do the assembly, too.

Finally, I rang a friend for some moral support, and she chuckled, ‘But when I read your books, I think of poetry… it is the way you write,’ she said breezily.

I decided to stick with the timetable and do the workshop as initially planned.

So, as I was wondering how I was going to compose an upbeat email to the school about my decision, my eyes somehow wandered off and settled a photograph on the far end of the wall. It was a picture of a Fulani woman I took years ago in northern Nigeria; she was dressed in bright clothes and had beads on her hair. After staring at it for what seemed like hours but was only a few seconds I heard a voice in my head about a girl who liked many colours but would only wear blue when she went to see her grandma. Why? Was it because she liked blue or because her grandma liked blue?

I grabbed a pencil and paper and began writing. I didn’t know if it was going to be a short story or not, but I remember reading it back, and it felt like a poem with sprinkles of intensity and imagery, which surprised me a lot.

So, I wrote and wrote, I was very thankful I had something to do during the first Lockdown, and that was how I came to write my first poem titled What are Colours to Adaora!

Then, I wanted to write more poems children would enjoy, as much as I enjoyed the stories our mother and sometimes our grandfather told my siblings and me when we were children in Nigeria. 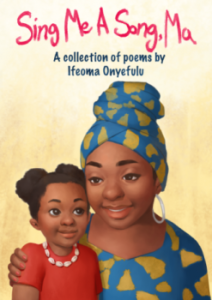 In December 2020, I published some of the poems online, as a collection, titled Sing Me a Song, Ma.

Two of the poems, especially Grandma’s Tree, are about nature, and the way we treat our trees. It was inspired by a conversation I had with our late mother about her favourite avocado tree, which didn’t produce any fruits for a long time.

Another poem, Rain, is about water shortage, people in low-income countries often struggle to get enough water. During the dry season, when rainfall was rare, we bought water from a well, but in the raining season, we saved enough rainwater for cooking and washing, which lasted for several days.

However, some of the poems are lighthearted, for example, Sing Me a Song, Ma, is about a child who doesn’t want to go to sleep, so she comes up with a brilliant way of staying awake by getting her mother to sing her song, “A song that will make my eyes wake up and…. A song that will make me dance.”

Finally, I hope Sing Me a Song, Ma, will be an e-book for children and their families to read aloud together.